He is here! A little over two weeks ago we welcomed our second son into the world, Heath Joseph Rosenberg. 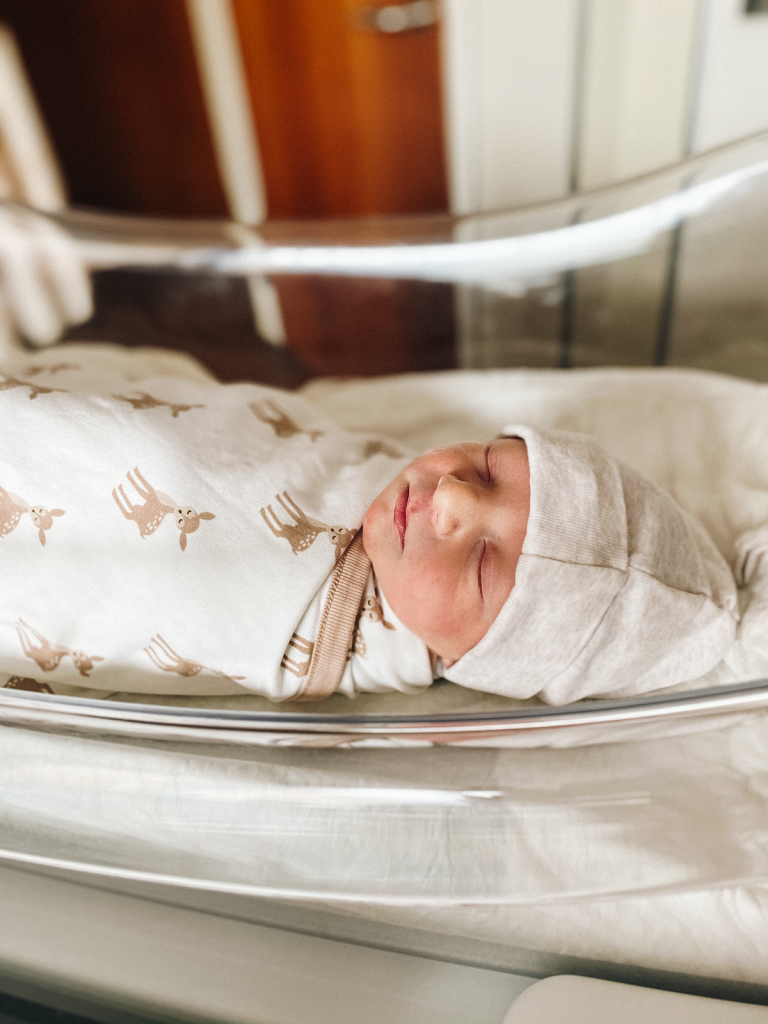 I announced my pregnancy not that long ago (here) and also shared the anxiety I felt being pregnant during a pandemic (here).  This time around I was much more afraid of labor and delivery, partly because of COVID and partly because I was afraid of leaving Jude and something bad happening. When you experience the love of having a child, you know how much there is to lose. Thankfully everything went smoothly and we’ve been soaking in all the newborn cuddles.

Leading up to my labor, I knew my pregnancy was coming to an end. Because my doctor was nervous by how quickly I delivered Jude, I had the option to be induced at 39 weeks. We put in the request to schedule my induction for the weekend of October 16th, but in the back of my mind, I knew I wouldn’t make it that long. At my last appointment, I was measuring behind and knew my body was just done (and mentally, I was so ready to not be pregnant anymore!) and I was very eager to meet this little one.

A few days before I gave birth I was talking with my best friend Christina about when we thought I’d deliver, hoping that the baby wouldn’t decide to come the night of the Vice Presidential debates (thanks Heath for waiting until the next day!) My husband and I had been going back and forth on names (we didn’t know the gender) and we were stuck between two boy names – Ronan and Heath. Funny enough, I was scrolling Instagram one day this summer and came across a photo of Heath Ledger in the 90s and I instantly fell in love with the name, which is how it was added to our list. I told Christina how I had a dream that I delivered a baby boy named Heath and woke up feeling extremely connected to the baby. Because my husband was between both names if we had a boy, I didn’t want to sway him one way or the other (I wanted him to love his name on his own!) so I never mentioned the dream to him, but I told Christina I just knew that there was supposed to be a Heath in my life.

On October 8th after putting Jude to bed, I sat down and started watching Cuomo on CNN… proof that today’s politics can send a woman into labor. I was finishing up my labor and delivery playlist when I got my first contraction. At first, I thought it was possibly a Braxton Hicks because I’ve had them pretty frequently, but something felt different. Apart of me just knew that I was going into labor. I downloaded a contraction counter app but didn’t get another contraction until an hour later. My next one came 40 minutes later, which is when I headed upstairs to grab my heating pad. Quickly, things progressed and my next contraction was 10 minutes later, then 9 minutes, and then 8 minutes, which is when I called my doctor. About 10 minutes later she had called me back and I was already on my way to the hospital. With Jude, I progressed extremely quickly and I’ve been warned my entire pregnancy that I probably will go into labor even quicker than the first time, so to head to the hospital right away. The ride to the hospital was so different this time around. With Jude I was in excruciating pain and experiencing some pretty crazy symptoms (I couldn’t stop vomiting and also had trouble with my eyesight). This time between contractions, my husband and I were telling jokes and sharing some of our favorite stories about Jude, which helped ease my anxiety. I got to the hospital and was 6CM dilated and my blood pressure was pretty high, which also happened with Jude. Between contractions they gave me a COVID test which I’m not going to lie… it was pretty bad. My husband kept a calm face during delivery but the look on his face when he saw how far they stuck that thing up my nose said it all. They swabbed for a long 15 seconds and quickly got the results back that I was negative. 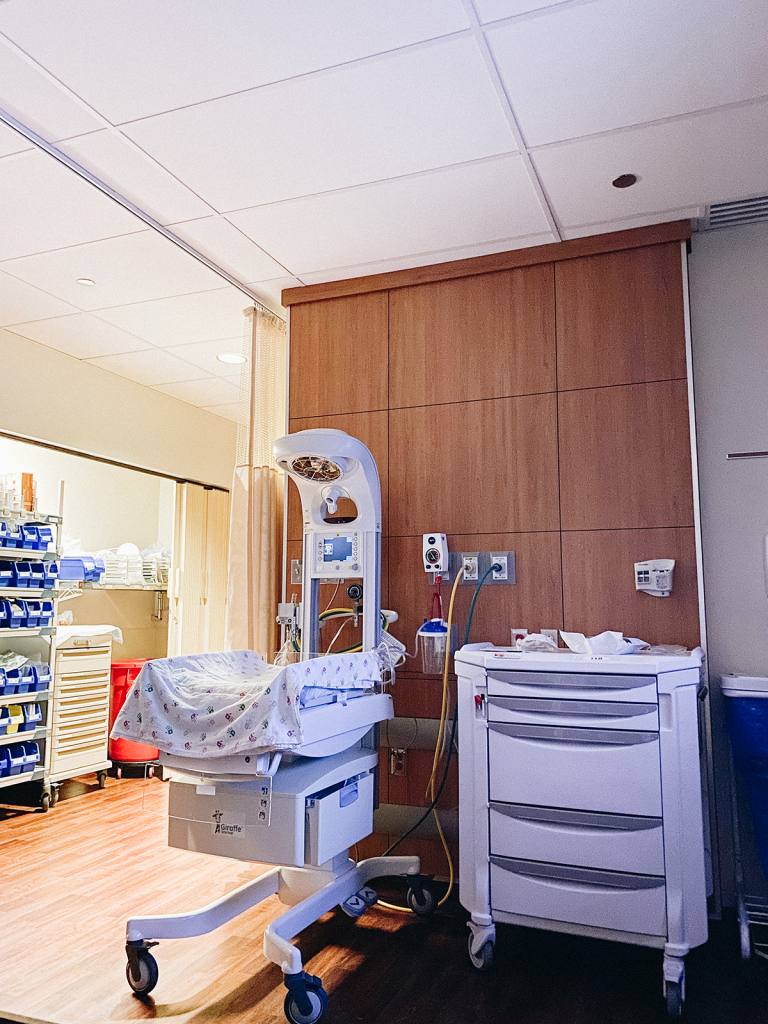 My nurse could tell I was in pain from contractions and at this point, they were only a few minutes apart. She RACED me upstairs and before I knew it, I was getting my epidural. While waiting for the medicine, I practiced some breathing exercises that were extremely helpful in getting me through the pain (my nurse said she was very impressed with how “in the zone” I was). Rather than trying to “move around” through the pain like I did the first time, I stayed calm and focused which made a big difference. Unfortunately at first, the epidural only worked on my left side, so I still felt contractions on the right side of my body. They made me lay on my side to get the medicine to “even out” which thankfully did the trick. After a few hours, my doctor came in and it was time to push. I pushed for three minutes (no lie, my husband counted!), and at 3:16 AM on October 9th (at exactly 38 weeks) our new baby boy was in my arms. Pure bliss.

With Jude I wasn’t able to hold him right away because there was a risk that he could have swallowed meconium, but with Heath they were able to put him directly in my arms. I have to say, that moment was so incredibly special and if you have the option to hold your baby first thing, I highly recommend it. Nothing can compare to the feeling of the doctor putting them on your chest and meeting them for the first time! After some skin to skin and lots and lots of cuddles, the nurse weighed him in at 6 pounds 3 ounces. 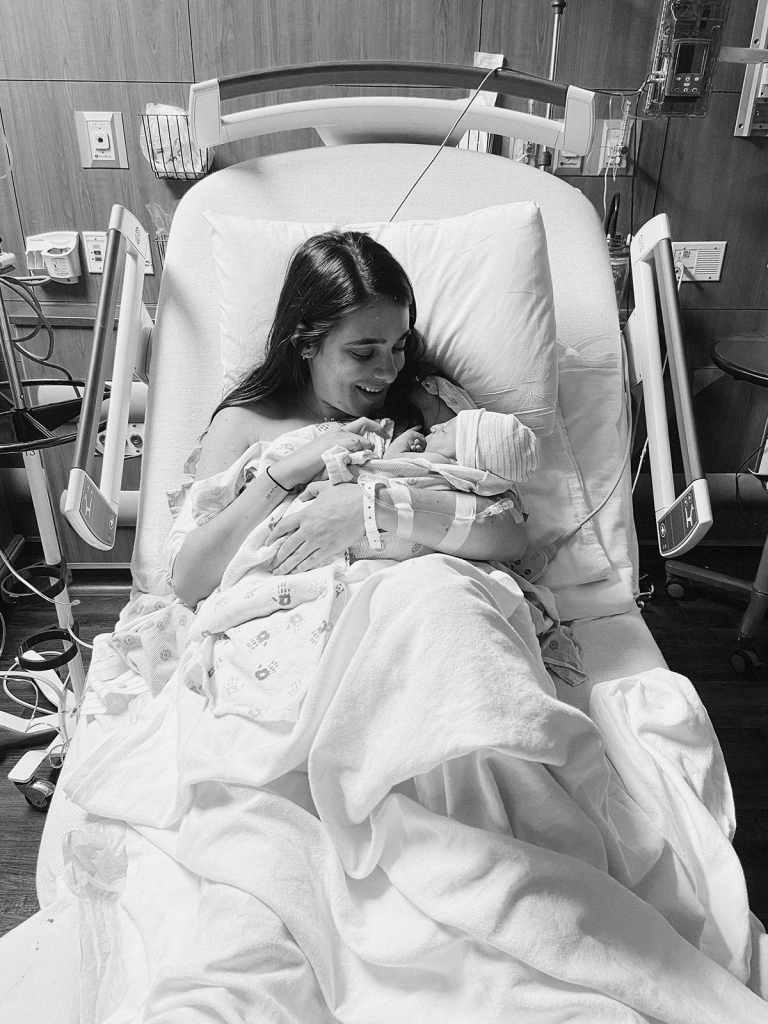 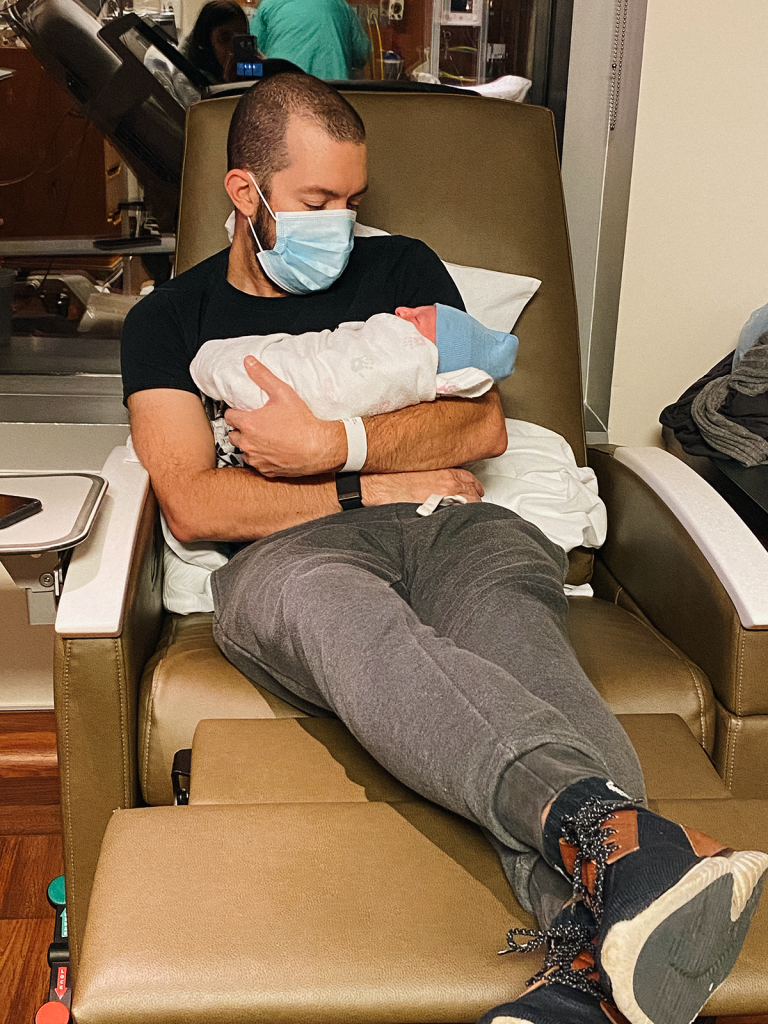 The second my husband saw him he said to me “this is our baby Heath” and at that moment it just confirmed that his name was meant to be. The nurses all agreed that the name fit him as well! We chose the middle name Joseph after my Father and it’s a funny coincidence that Heath’s initials are HJR and Jude’s initials are JHR. Heath was also born on John Lennon’s birthday (we’re huge Beatles fans), his due date was the day before our wedding anniversary, and he’s a Libra just like I am. So many little signs that this little guy was truly fate.

While this labor and delivery was smoother than Jude’s, recovery was a little more intense for me. I experienced REALLY bad cramping that left me almost in tears. My doctor let me know that this is common with your second child, and thankfully they were able to prescribe me something stronger to help ease the pain. They lasted over a week after giving birth and were probably the worst part of labor and delivery for me. Typically mom and baby stay at the hospital for 48 hours but because of COVID, the option to leave earlier was on the table. Due to my cramping, my doctor was a little reluctant to send me home on Saturday, but ultimately we both decided I could go home. I was so eager to get back to Jude and bring Heath home! 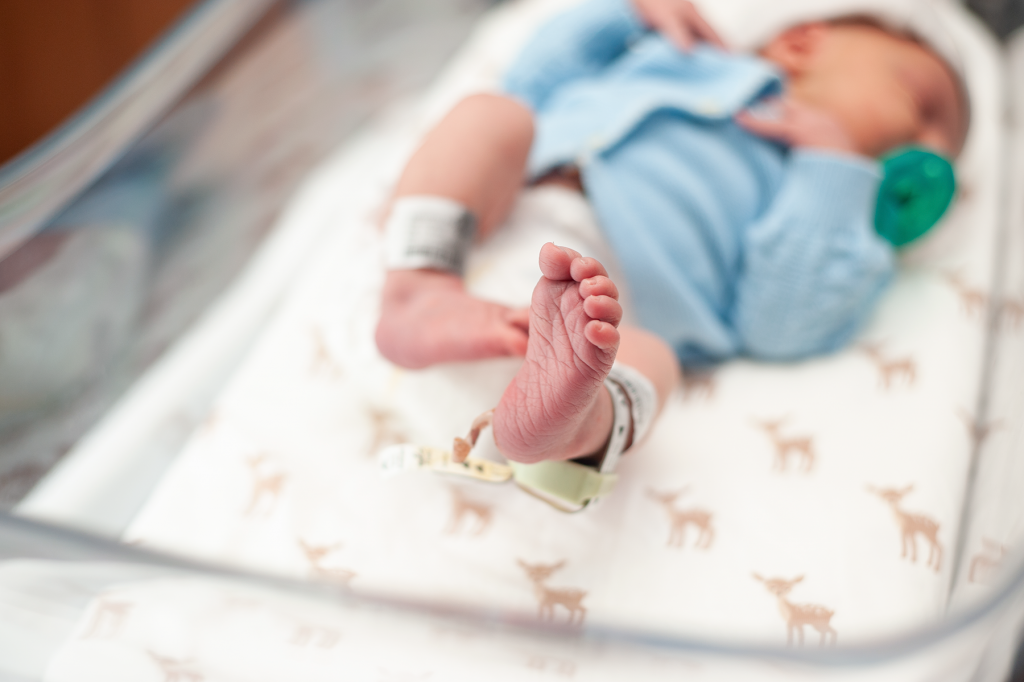 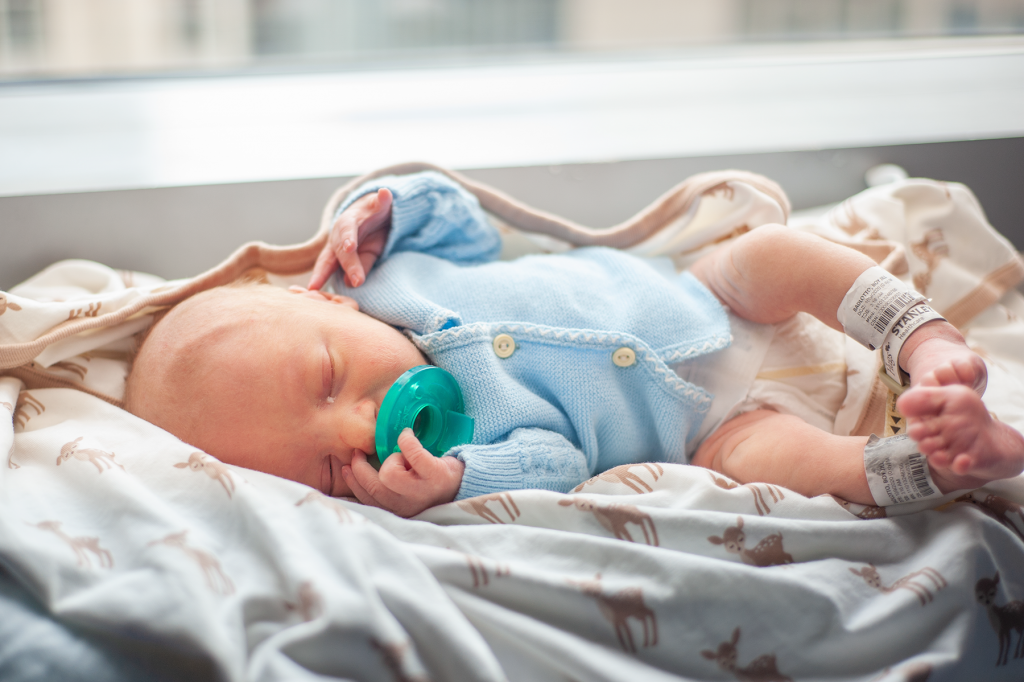 I have to say, COVID didn’t impact my birthing experience as much as I thought it would. I only had to wear a mask until my test results came back (when you’re going through contractions you don’t even notice a mask!) so I only had to wear one while in triage. My husband had to wear one while I delivered and then any time someone came into our room, but because my delivery was so short, it really wasn’t a big deal. Out of courtesy and to protect myself, I also tried to remember to put my mask on any time someone came into the room. My husband was allowed to leave the room and go get food, although it wasn’t encouraged, and if we wanted to take a walk around the hallway we had to wear a mask. We weren’t allowed any visitors but they did just start the newborn photography that week again, so we were able to get hospital photos of Heath! 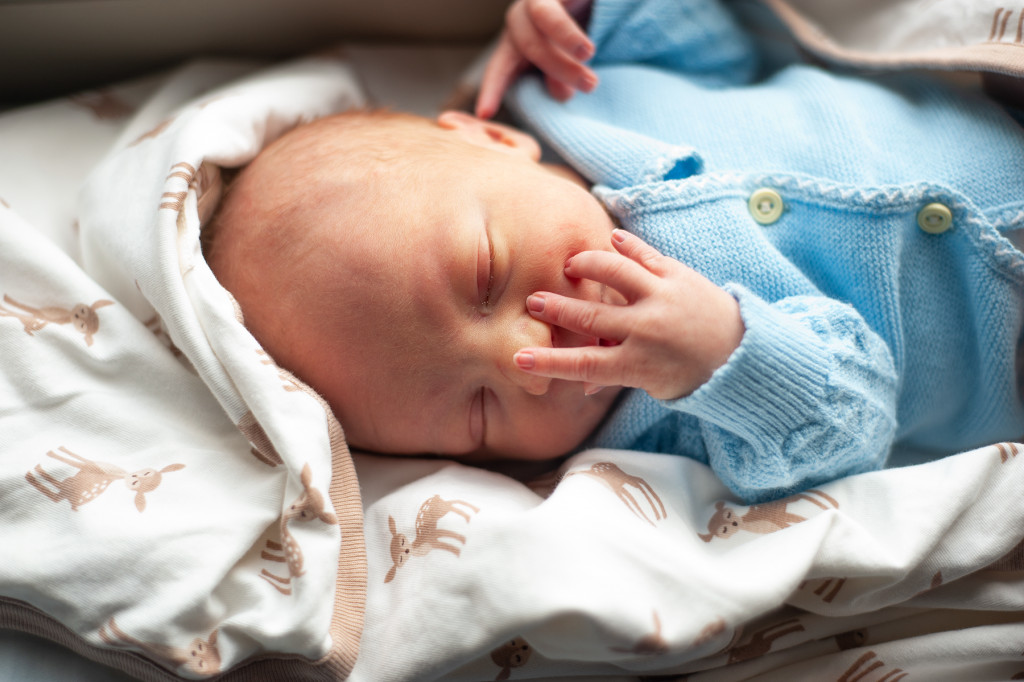 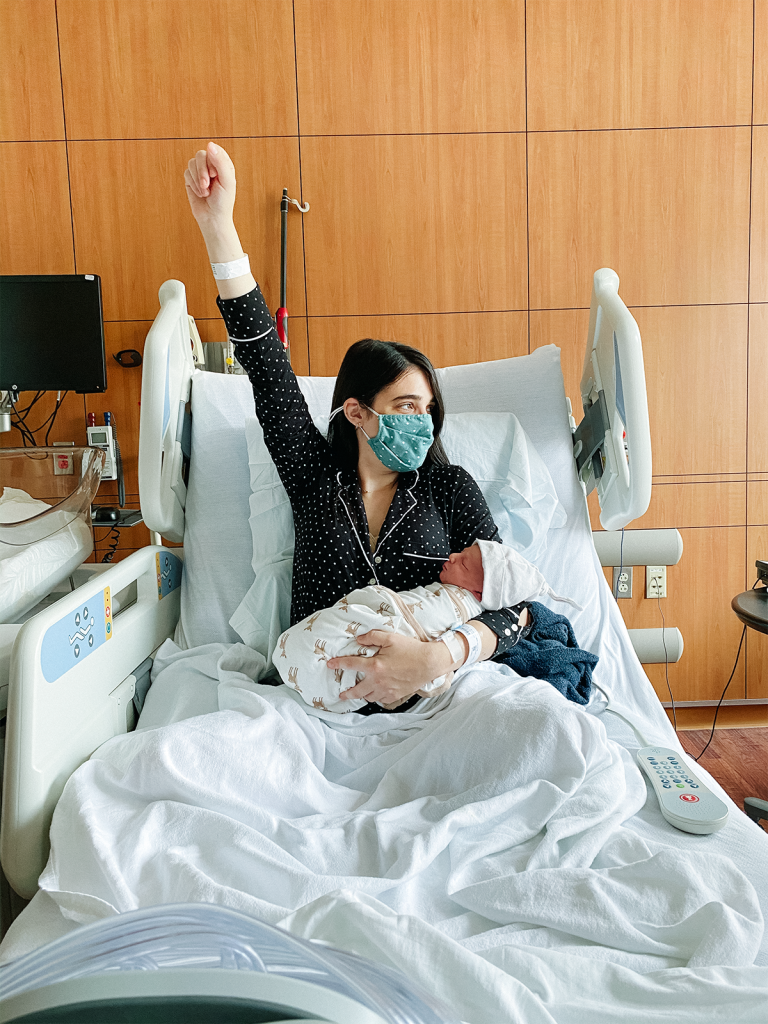 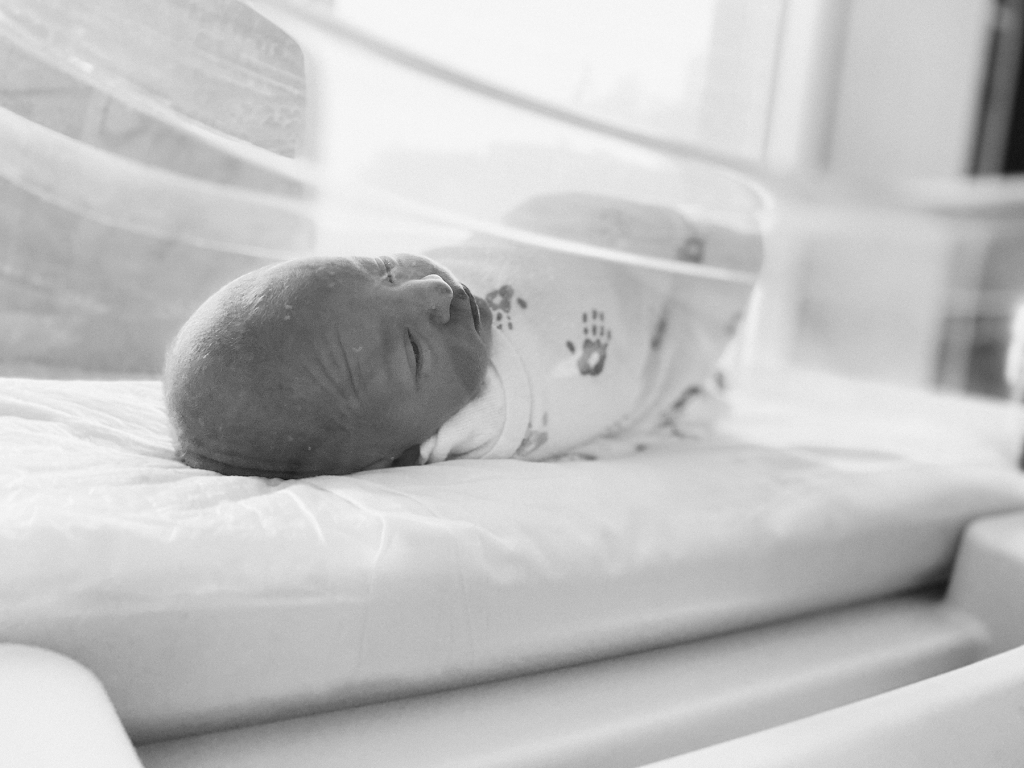 So far, Jude has been really great with Heath and while we were in the hospital, he really had fun with my parents! He’s still very young so he can get handsy and his hugs can be a little strong, but he’s responded very well to him! Luckily my parents are here until November and my husband has one month of paternity leave. He took two weeks off when Heath was born and will be taking the other two weeks when my parents go back, so I’ll have a ton of help for an extended period of time. And although the newborn phase isn’t my favorite, I’ve been trying to soak in as much of it as possible because I know how fast it goes. He has already changed SO much since these photos! 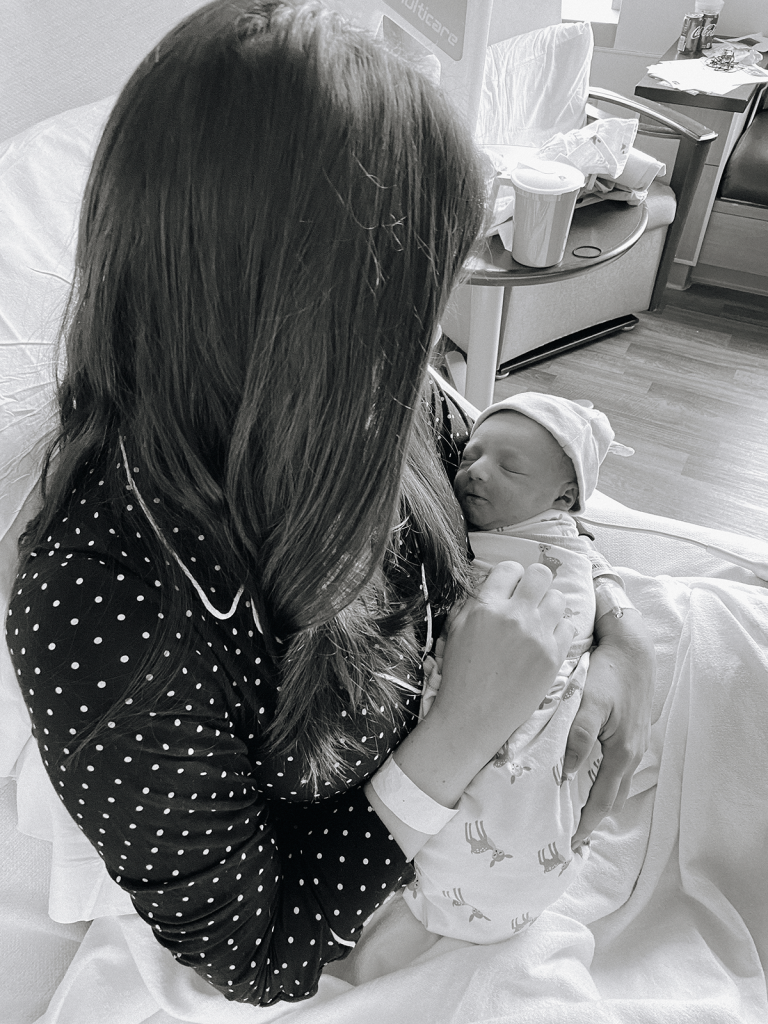 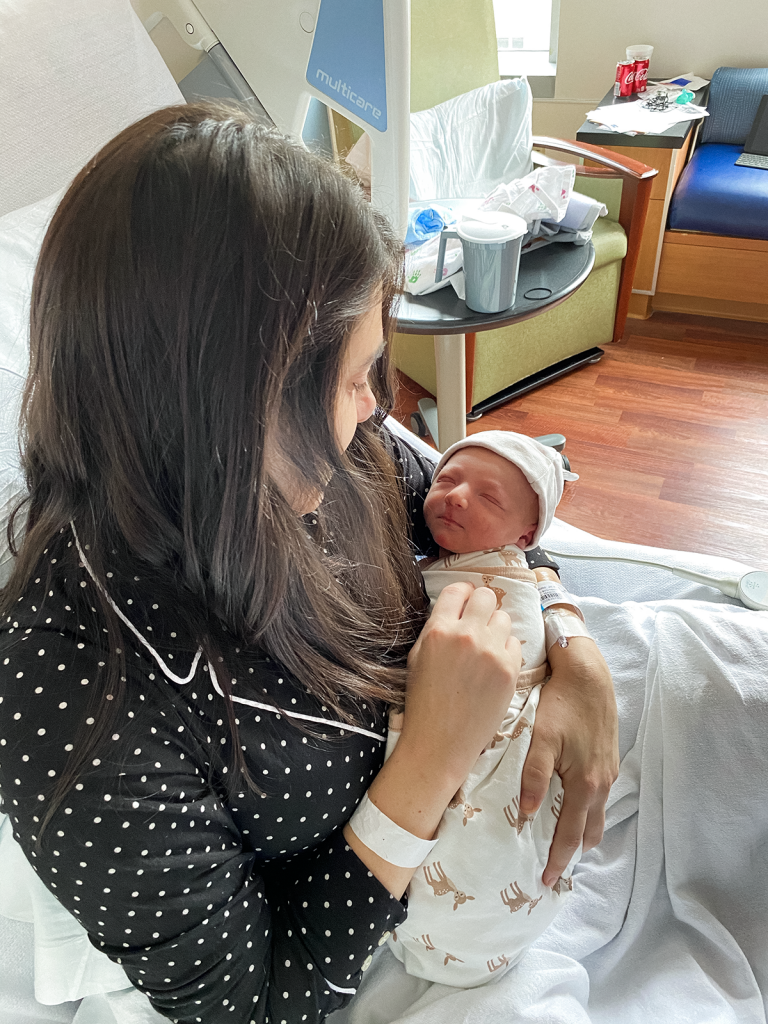 I know having two under two is going to come with its challenges, but my heart skips a beat thinking of Jude and Heath growing up together. I can’t wait to watch them play, celebrate the holidays as a family of four, take our first vacation together, and experience life with them. Lucky doesn’t even describe how we feel to have these two little ones and while the world can feel very heavy right now, every day is so much sweeter because of them. And being reunited with my favorite Pinot Grigio also makes my days a little sweeter, too. 😉